I told you that I had been spending a lot of time in the garden this summer. It is simply because of the summer, I have a lot of weeding to do. But also, the weather has been strange this year and it has been sunny and rainy alternately. The rainy season ended a long time ago yet it has rained a lot since then. It is good for the plants to get both plenties of sunlight and water and they are growing fast. My vegetables are all growing well, and so are the weeds-haha.

Anyway, I saw some new plants in the soy section and they look very much like squashes. That’s strange. I didn’t plant any squashes here. 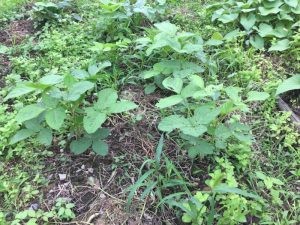 I only planted soybeans here.

And these squash looking plants aren’t my squashes.

Maybe they are pumpkins l planted last year. The seeds were mixed in the soil. It happens a lot in my garden as I talked about it in this video.

I like this kind of wildly sprouted plants. They are vibrant enough to grow on their own. I like to leave them as they are.

However, some of them are blocking the soys and in that case they are just like other weeds.

I don’t know what to do with them.

Well, I’ll cut some of them near the soy plants and leave the rest.