Ninjas and Yamabushis, practitioners of Shugendo, were connected after all. Does it mean their diets are similar?

Ninjas were eating brown rice, barley, millet, Umeboshi, sweet potatoes, taros, vegetables, miso, tofu, and other soybean products. Ninjas avoided eating spring onions, garlic, Nira and meat before they went on their espionage missions because of the smells. They needed to get rid of any smell when they sneaked into enemies’ houses so that they wouldn’t be noticed. What is interesting is that those foods Ninja avoided were also forbidden in Shojin cooking. You know Zen Shojin Diet I talked about before?

The foods Ninjas avoided before going on their missions are called Gokun in Shojin diet. Zen monks didn’t eat them all the time because they are too stimulating. They could distract the monks from training.

Meat is forbidden in Shojin diet, too. Animal products like beef, pork, chicken, and fish are called Sanen, and along with Gokun they were avoided by Zen monks.

What about Yamabushi, then? What were they eating?

Apparently, they were practicing the Shojin Diet. Yamanushis were Buddhists, as well, and they had a lot of connections with other Buddhists, including Zen Buddhists. Jikobo from the Princess Mononoke was a monk, wasn’t he? The Shojin Diet is a diet of Buddhists, and it was practiced among Buddhist monks in general, not only by Zen monks. Many monasteries were located in the mountains, and Yamabushis often visited them. Koyasan is a good example of the mountains where many Yamabushi trained.

If Yamabushis became Ninjas, they must have brought their knowledge of the Shojin Diet with them to Ninja tradition. 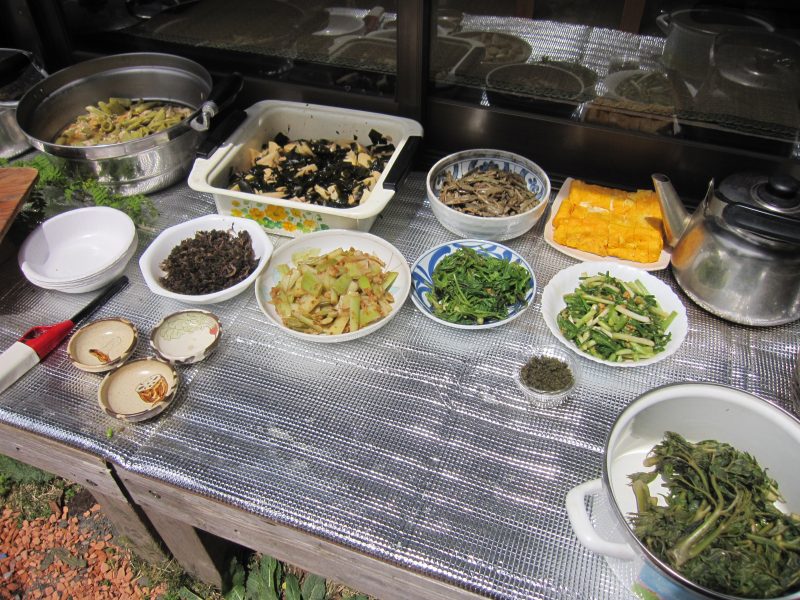 These are mountain herbs we have in Japanese Satoyama. Both Yamabushis and Ninjas ate a lot of mountain herbs, too, especially when they trained in the mountains.

Some of the mountain herbs have medical effects, too, and Koka Ninjas used medicine in their missions.

Well, medicine was one of the industries of Koka, and it was in Hino, as well. In fact, one of the main products of Omi-Hino-merchants was medicine.

That makes me wonder about the connection between Ninjas and Omi-Hino merchants. There is an episode that one of the Omi-merchants met a Zen monk during his trip, and the monk was skilled in martial art. Omi-merchants traveled a lot and met all kinds of people. They had to walk across the Suzuka mountain range where many of Ninjas and Yamabushis trained. Omi-merchants were very fit people, too. They walked many miles each day carrying a lot of goods.

Wow. It is deep. But I am not going to get into it now, since this blog isn’t about history.

The bottom line is that there is a similarity among the diets of Yamabushis, Ninjas, Zen monks, and centenarians.